A tricky story, intertwined plots, fascinating characters, powerful scenes… How do you write a story like Pulp Fiction? Let’s analyze it! 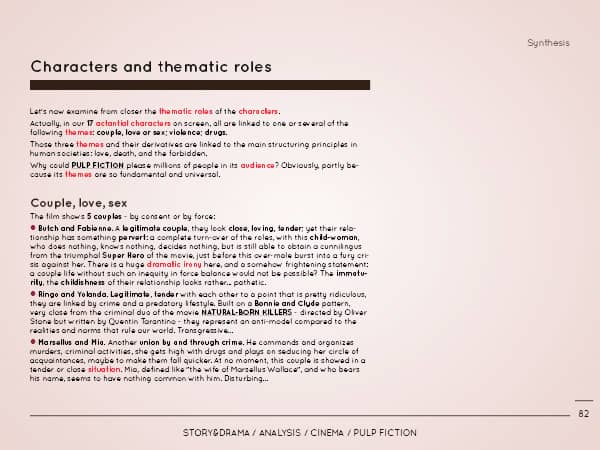 Let’s now examine from closer the thematic roles of the characters.

Actually, in our 17 actantial characters on screen, all are linked to one or several of the following themes: couple, love or sex; violence; drugs.

Those three themes and their derivatives are linked to the main structuring principles in human societies: love, death, and the forbidden.

Why could Pulp Fiction please millions of people in its audience? Obviously, partly because its themes are so fundamental and universal.

The film shows 5 couples – by consent or by force:

Legitimate, tender with each other to a point that is pretty ridiculous, they are linked by crime and a predatory lifestyle. Built on a Bonnie and Clyde pattern, very close from the criminal duo of the movie Natural-born killers – directed by Oliver Stone but written by Quentin Tarantino – they represent an anti-model compared to the realities and norms that rule our world. Transgressive…

Another union by and through crime. He commands and organizes murders, criminal activities, she gets high with drugs and plays on seducing her circle of acquaintances, maybe to make them fall quicker. At no moment, this couple is showed in a tender or close situation. Mia, defined like “the wife of Marsellus Wallace”, and who bears his name, seems to have nothing common with him. Disturbing…

They stand as the archetype of the adultery couple, attracted to each other, but confronted to the prohibition of their attraction. What would their love be made of? According to the deep emptiness of their conversations: of nothing except drugs and sex – if their “high” would allow them to fuck. Finally, each of them has a closer relationship to his/her drug than to his/her potential partner. As a symbol of the way they meet without meeting, Mia welcomed Vincent with an obvious voyeurism and spoke to him at first with the help of a microphone and a sound-system, in a both erotic and distant way, while he succeeded in resisting the dangerous temptation she represents. Impossible love!

Here we meet an unbelievable form of sexuality, the homosexual rape of a adult by another adult, phenomenon that very rarely happens in reality, and probably the most corrosive element of the whole movie: such a central character, involved in half of the plots of the movie, and who has to be subject to the most sadistic and humiliating sex abuse. The character of Zed, white guy dressed as a policeman, satirizing legal authority, and the gloomy and scary (but quickly and easily eliminated) character of “The Gimp” allow the transgression to reach heights.

Do we like Pulp Fiction because it shows human nature worse as we are, allowing us to feel superior in front of so much monstrosity, or do we like it because it reveals what is perverse and dysfunctional within ourselves?…

The violence appears as the other main theme that impregnates all the work.

In brief, it seems that the world of Pulp Fiction has no room for empathy, humanity or mercy. The worth of the characters only depends on their ability to kill without getting killed, to be the predator and not the prey. Law of the jungle, law of the strongest, generalized egoism. Is it a satire of our world? Do the scriptwriters and the director suggest any solution to get out of that sordid hell? Apparently not in Pulp Fiction, and neither in the rest of Tarantino’s work, from Reservoir Dogs to Kill Bill, from massacre to massacre… This world without morale, the “postmodern” artist seems to have no problem accepting it, and so does his audience. (We can think of the novels of the American Brett Easton Ellis, novels that mix, alike Tarantino, sex, ultra-violence, gore sex and aestheticism.)

Strangely this omnipresent violence, instead of creating feelings of horror or fear, is always treated a humorous, ironic, light, brilliant way – its negativity gets neutralized, converted into pleasure. This logics of denial of the suffering and death, makes here again think about the mechanisms in perversion, which consists in a cancellation of the frontiers between good and evil and a pure assertion of the desires (of sex, of death) whatever their consequences might be.

Drugs makes, as we previously saw, a very frequent theme in Pulp Fiction (as in other works of the scriptwriters, Quentin Tarantino (Kill Bill) and Roger Avary (Killing Zoe…) Drugs are particularly present in 2 plots:

Those drugs yet stand as a permanent metaphor of the characters‘ lifestyle in Pulp Fiction: hyper-powerful, euphoric, excessive, artificial, at the same time empty with meaning and extreme, simultaneously generator of pleasure and death.

Popular culture, especially through the theme of fast-food, comes again and again as a leitmotiv:

Beyond the farce side of it, this insistence on food results in anchoring the movie in the everyday life and banality, and in a violent contrast with the excesses and violences of all kinds. A deletion of this theme would make the movie lose much of its humor.

This feast leads us straight away… to the theme of scatology. Scatology stands as another fundamental spring of the movie, linked to food but also to pop culture, to transgression and to prohibition.

The cultures and artworks that claim themselves to be noble, would never send their Heroes to the bathroom. The Heroes – businessmen, femme fatale, over-mighty killers, sexy fashionable gangsters, etc. – are usually sublimated, shown as belonging to our world that is beyond our dirty contingencies. Even if Pulp Fiction does not insist too much on the most sordid sides of our digestive functions, the movie still affords itself the luxury of instituting the toilets as one of its most frequent dramatic places:

In total, 7 scenes of bathroom, an absolute world record in the story of the cinema, usually so modest, if not puritan. In total, one provocation more, to which we can add the outrage of the story of the gold watch that stayed “4 years” in the anus of the father of Butch prisoner in Vietnam, then 2 years more in the anus of the dignified Captain Koons. Outrage, double, triple outrage, because this watch represents at the same time money (it is made of gold) on a well-known psychoanalytic mode (according to Freud, the excrement is our first possession, our first production…), the family heritage (impregnated with shit) and patriotism (since it was stored in the anus of 2 soldiers, including an officer), not to forget a form of homosexuality that this double storage implies since that watch came from one anus to another, like in a double sodomy, a theme that is reinforced by Zed’s rape of Marsellus… Finally, what America cherishes as its most important values – money, national pride, power, army, male domination – gets covered with piss and shit.

The gallery of the characters can be approached as a series of clichés with archetypal resonances:

…
Did you enjoy it? Want to know more? Then read the full story analysis of Quentin Tarantino’s Pulp Fiction and improve your scenario writing skills from the study of its script.