This  script analysis of the music video of the song Karma Police by Radiohead is an abstract from our tutorial e-book 14 music videos. 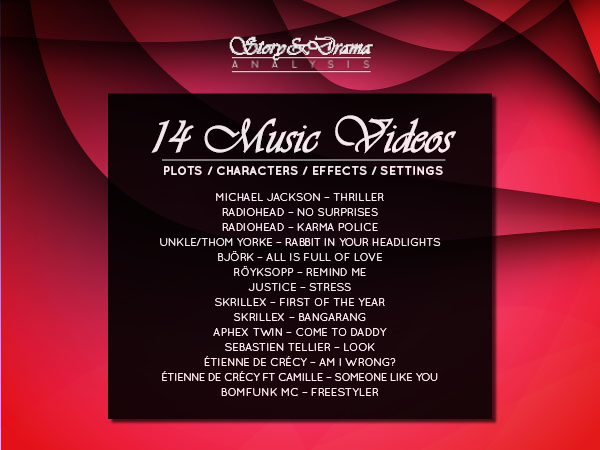 The video tells a strange story of man hunt.

World: the video opens in this place, a car. It is very common (everybody knows the interior of a car) and at the same time very original, because this interior is very special, nearly baroque. Are we in an “usually extraordinary” world? Like the daily life of someone very rich?

Intertextuality: like in the video of Rabbit In Your Headlights and in other Radiohead videos, a car is at the center of the drama, which adds to a very particular fiction universe.

00:07 The camera slowly rotates on its axis inside the car and turns towards the dark road – it is night. This camera move revealed some grass on the right of the car; we are in the countryside it seems.

Point of view: we still ignore who we are supposed to be in this story as viewers: a passive character (and if yes, then who is it?) or a disembodied and omniscient narrator?

00:20 Sound of the car door opening and closing. A light turns on and off inside the car.

00:28 On a drum strike – which launches the beginning of the lyrics “Karma… Police…” – the headlights turn on, revealing a totally deserted countryside road. The car starts and drives slowly.

Characterization: the series of clues (car door sounds, light inside, headlights on) out of necessity suggest that at least one person took the place of the driver’s seat and yet this person – who will soon become an actantial character – is not shown to us at all, which generates an impression of mystery. It is an effect of information distribution asymmetry by refusing to inform the viewer: this character and the others (the man who will be the Antagonist and Thom Yorke who will more or less be the Hero), know who the driver is and what he looks like, while we will never know.

World: we thus attend the progressive revelation of the plot‘s world, element after element, firstly the car, then the side of the road, then the road. (By the way, the presence of such a stylish car in the middle of nowhere looks enigmatic).

00:45 A white point appears in the horizon and grows slowly.

00:57 We start to distinguish that it’s a man, running as if he wanted to escape the car, turning back to take glances at it. The man does not run very fast and does not look like an athlete. We can already guess that he will not run for very long.

Characterization: very progressive revelation of this character, who will become the Antagonist. His presence in the middle of the road, in the middle of nowhere, looks as mysterious as that of the car which is following him.

01: 07 As we get closer to the running man, the camera rotates back to its first position. It leads us again to the back seats of the luxury car, on which we can now see Thom Yorke, looking down, depressed, stoned… and who sings the lyrics in an apathetic way: “This is what you get, this is what you get, when you mess with us…”

Point of view and characterization: the camera move remains inexplicable: who can watch things this way and rotate in such a cold, mechanical manner? The driver? No, because the move does not seem to be human. It seems to be the vision of a robot, but a robot is not allowed to drive a car… Furthermore, what is the real role of Thom Yorke in this story? He is sitting in the back of the car, passively, as a simple viewer, though he is involved since he sings these lyrics which sound threatening and seem to be adressed to the running character (who starts taking the shape of an Antagonist). It is actually not possible to say more about the undefined character of Thome Yorke, which adds even more mystery and tension; we have to follow an action that we cannot understand.

Structure: even if nothing is clear, it seems we already have the elements of a drama, that is: a Hero, an Antagonist, and a conflict between them. Thom Yorke’s lyrics sound like a catalyst of a plot, even if it is hard to guess its dramatic question (which will get more precise later on). End of Act I.

01:36 The camera rotates again, back to the road. The man is still running, rather slowly and awkwardly, already exhausted and out of breath. The car follows him at the same speed as before.

Structure: beginning of Act II. The forces get more equally balanced, in a kind of slow race between a car and a runner.

Structure: this pure and simple repetition of the catalyst lets the action stagnate and the tension stays unresolved with nowhere to go.

02:26 The camera comes back to the road. The man is still running. A shot shows him from the front: he is a 40-50 year-old man, looking mad, staring right ahead and focused on his physical effort. The car’s headlights blind us from behind him.

Characterization: this finishing of the progressive revelation of the Antagonist shows us a weak, pathetic character, as weak as the apathetic Hero. Here again, the forces get balanced.

02:50 Back to the shot which shows the man seen from the car that is following him. They have slowed down the car. The man, visibly out of breath, walks a bit, then stops and kneels on the road, exhausted. The car stops just behind him. He seems to be the loser.

Structure: end of Act II and the very beginning of the crisis which opens Act III.

03:16 The man stands up and faces the car, ready to fight. The car suddenly retreats 20 meters backwards before stopping. The man seems to try to understand the driver’s unclear intentions.

Structure: this troubling face-to-face is typical of the crisis. We can strongly feel that the moment is decisive and that the plot is going to get resolved very soon. In this situation, the car – protected and motorized – has the advantage in comparison to the weak and vulnerable man.

Characterization: the behaviour of the two characters remains very difficult to read, to understand, and to interprete. We still do not know who they both are, why one is chasing the other. Their deep motivations stay totally unknown.

03:25 A camera shot reveals a long trail of liquid that is spreading over the ground from underneath the car. Is it oil, water, petrol?

This element upsets the dramatic data and causes a spectacular change of situation: because of this weak point in the car, the pedestrian Antagonist can take the advantage back.

03:30 Several shots show the dramatic situation of the man and car facing each other without moving or deciding anything, observing each other and waiting; like animals before they start fighting.

03:35 Nervously, the man, filmed from behind, is passing something behind his back.

Structure: look at how the elements of the dramatic answer of the crisis (beginning of Act III) are being given to us one by one, allowing us to imagine a possible end.

03:42 The object is a box of matches. The man has difficulty lighting one, it’s awkward. He finally throws one over the liquid trail, which is instantly set on fire, the flames progressing towards the car.

Structure: all the accumulated dramatic tension can finally get resolved in this explosive climax.

03:51 The car reacts instantly by quickly driving backwards. The burning flame is faster however and in a few seconds, it invades the windshield then all of the car.

Structure: this failed self-defense of the Hero finalizes the climax and seems to prove he has been defeated.

04:10 The camera rotates with difficulty back to the car’s interior, now empty. The music turns off to a depleted machine sound.

Characterization: this last camera move finally confirms that this point of view was not human, even though we still cannot say what it was. The mystery remains.

Structure: like in Rabbit In Your Headlights, this answer to the dramatic question is not complete and does not allow any viewer to tell exactly what happened, who won, who is who, who does what. The only certainties are that the Antagonist is at the moment out of danger (except if Thom Yorke, or another character, would have a weapon and continue fighting the man on the road) and that the uncertainty triumphs again in the end… 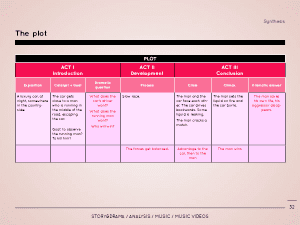 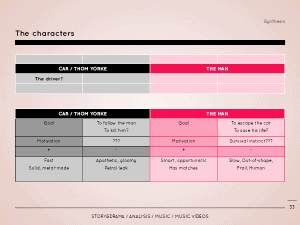 A strategy of missing information

This video looks very simply built: one unique plot, not more than two actantial characters shown on screen – the man who runs away and Thom Yorke – and another character off-the-field, the driver. In theory those few elements could be too poor to allow for a great video, and yet…!

So, where does the magic of this story come from?

It comes from the generalized lack of clear and precise information about the dramatic data and from the fact that some of the action will always stay incomprehensible. The viewer will permanently try to understand this situation, which looks simple or even simplistic, and fail repeatedly.

In fact, all the essential information is missing:

Actually, we cannot know why we are told this story or what is happening within it, or indeed before and after it.

And these missing pieces of information are precisely the core of the video’s deep message: the human being does not know why he exists in an incomplete, imperfect and incomprehensible world (and Radiohead’s lyrics are also often written in an incomplete way; fragments of lyrics, rather than full lyrics…) The video looks simple, but it is deeper than it seems, touching us through our deepest existential doubts.

Did you enjoy reading this music video analysis? Do you want to read more?